Our 2020 concert year was severely impeded by COVID restrictions, however were able to produce a beautiful online concert which you can view here.

Thank you to all of those who attended our 2019 Spring Concert. For those who were not able to attend, you can watch a video of the performance on our YouTube Channel.

Requiem: The Souls of the Righteous is a forty-minute, ten-movement work using sections of the traditional Requiem mass with scripture from the King James Bible, and poems from Grahame Davis.
Paul Mealor is one of the UK’s most well known living composers, regularly topping the Classical Charts. His motet Ubi Caritas et Amor was performed at the wedding of Prince William and Catherine Middleton in 2011, and then topped the Classical charts in the UK, US, Australia, New Zealand and France. He later composed the song “Wherever You Are”, which was released as part of the BBC programme The Choir: Military Wives, and became the 2011 Christmas number one in the UK Singles Chart.
“If there is a heaven, I want it to sound like the music of Paul Mealor”
– Frank Daykin, New York Concert Review

Whilst we were in rehearsals in New York, Paul told us that whilst he was writing this piece, two of his close friends had committed suicide within a short time of each other. His music and poetry are reflective of this experience as the themes of forgiveness and peace run throughout the Requiem.  His experience resonated with a number of the chorus and for many of us in Hong Kong as there has been an increasing awareness of the effect of suicide and depression in our society.

When Paul kindly gave the Cecilian Singers permission to sing the piece, it was a natural choice for us to choose a charity supporting suicide awareness:  The Samaritan Befrienders.

If you can’t make the concert but would like to make a donation please click here to donate.

We were delighted to announce our media friends at Wave Production will be doing the videography/photography, and Phantom Production provided video streaming for this concert
Thank you!

To see some of their work: https://m.facebook.com/wavechannelhk/video

Thank you to our sponsors – it is a significantly more complex concert than we normally host in Spring and we have been fortunate to gain their support.

Wuming RISE
A social enterprise whose mission is to find an attainable way to ensure full employment where every nation is self-reliant and has a sustainable economy.

A World War One Tribute Concert

In May 2014 for our spring concert, we dedicated our concert to all those who fell during World War One from all nations. We sang many well known WW1 songs, accompanied by war poems – HK$15K of proceeds went to the Hong Kong and China Branch of the Royal British Legion. Thanks to the British Consulate in Hong Kong for hosting this event at the amazing Opus. 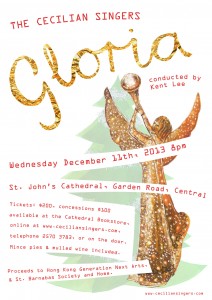 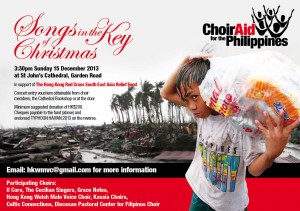 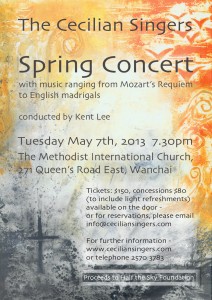 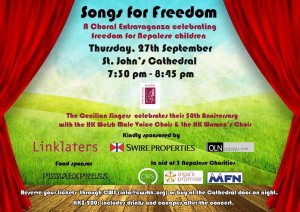 In 2012, we celebrated our 50th Anniversary with 3 concerts (Easter, Summer and Christmas) – please see below for further information.

Freedom Concert in celebration of our 50th Birthday was with the Welsh Choir and the HK Women’s Choir on September 27th 2012 at St John’s Cathedral. We sang a powerful mix of African and American Slavery Songs, Anthems and Choral Tributes based around the theme of ‘freedom’. The main beneficiary charities were the Child Welfare Scheme (HK), Olgas Promise and the Moonlight Foundation Nepal (MFN) who kindly helped organise the event and sponsorship . Conducted by Ronald Lam and Howard Topper. This event raised HK$78K (net) and we all really enjoyed singing with each other.

Spring 50: To kick off our 50th Anniversary celebrations, our Spring 50 Concert on May 3rd 2012 was themed around Herbert Howells – A Hymn for St. Cecilia and also included songs by Thomas Tallis, William Byrd, C.V Standford, Thomas Morley and R.Vaughan Williams. Conducted by Jennie Wong Yat Tsz.